Planets & Sattelites
On the Triangle Grid

Designate about 1/2 of the Triangles to be the “Planets.” TWO Players create a rock-formation with their bodies on these Planets (Triangles.) After they found their formation they lock into position. All other players are ‘Satellites’, roaming over, under, around and in between the spaces created by the planet’s rock-formations.

In this game we learn to find creative ways to construct rock-formations and to negotiate space around other people. Some players will be daring, others will be shy. And all have the opportunity to be creative and interact on a playful level.

When the Caller calls for a “MIX-UP”, Satellites and Planets exchange roles. Everyone gets the opportunity to create the strange and creative rock-formations, or cruise as free flying satellites. 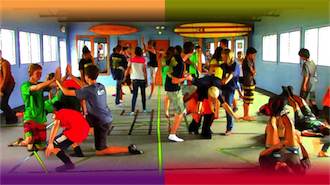 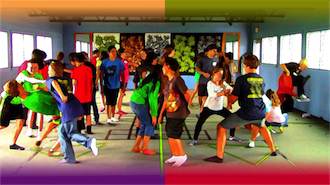